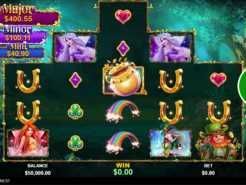 Play Now
One of the best ways to celebrate everything Irish is by playing Paddy's Lucky Forest Slots game. There is almost everything that Ireland is known for, including fairies and leprechauns to be found spinning on the reels. Experienced and new slot players will enjoy the game to play Paddy’s Lucky Forest Slots.

All About Paddy’s Lucky Forest Slots

This is a fun and colorful online slot that showcases all the fun things about Saint Patrick's Day and the fortune of the Irish. Players will see the beauty of this game as they run through the forest collecting rainbows and pots of gold.

Who is the Slot Developer?

The slot game developer is Real Time Gaming, and this is one of their latest games. It will join other RTG games such as Witchy Wins, The Mariachi 5, IC Wins, Frog Fortunes, Cash Bandits, and more.

Is There Demo Play?

The demo version of this game is ready and waiting for players to explore all the bonus features that it has to offer. During the demo play, players will be able to make wages with fun credits and accumulate fun credits to spin the reels. However, anyone who would want to win real money will have to make a deposit at a participating casino.

The theme of this game is Ireland and everything Irish. It is mainly focused on Irish mythology and receiving good luck and fortune.

There is a very interesting game design when looking at Paddy's lucky Forest Slots. The game opens to show an enchanted forest behind the reels as the backdrop for gameplay. Below the reels are the buttons to control the action in the game. The dashboard will show the balance, bet, and win amounts. The spin button is in the center along with the plus and minus signs to adjust the amount wagered on the game. This slot machine is organized as a 3 x 4 x 5 x 4 x 3 grid. The uneven rows make the game more interesting. Some of the symbols to find are a green fairy, purple fairy, leprechaun, horseshoe, a pot of gold, four-leaf clover, rainbow, pink fairy, diamonds, spades, hearts, and clubs. The four-leaf clover is the wild symbol. The pot of gold in the bonus or scatter symbol.

What Type of Slot Games?

This is a video slots game with Progressive bonus features. Players can look forward to a 5 reel video slot.

What are Some Betting Options

More About the Pick Bonus Feature?

The Pick Bonus Feature is activated by the bonus scatter pot of gold symbol. The of these on the reels will show a chance to pick from three pots of gold. Players may receive the number of free spins and multipliers they have picked—for example, 6 free spins and a 12x multiplier.

What is the Slippery Wild Feature?

When any wilds appear on the reels, it will activate the Slippery Wild Feature. The wilds will slip down to the next row with each spin until they fall off the reels. The wilds will only be found on the second, third, and fourth reels.

What is the Slot Game Rating?

This game has a popularity of 9/10 with online players, so it is something to take notice of.

Some Jackpots and Slot Wins?

There are three Progressive jackpots in the game—a major, minor, and mini jackpot.

Can We Play for Real Money?

Real money gameplay is waiting with at least the minimum deposit into the casino. This will allow players to try for the progressive jackpot wins.

Paddy's Lucky Forest Slot is available for mobile play. This is an online game that can be played on Android and Apple iOS. Players will still have the option to download the casino app.
Play Now